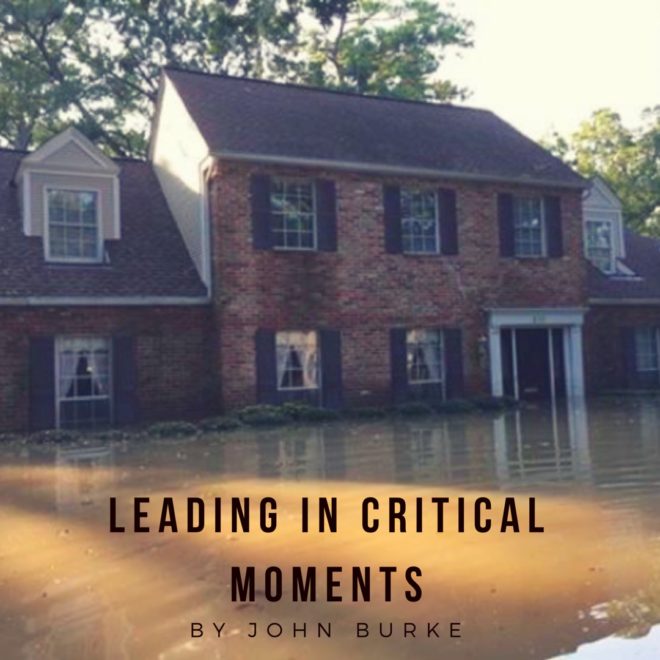 When the Titanic is going down, you don’t call a meeting, you just lead people to safety. As church leaders, there are critical moments when you need to step into the authority God has given you and lead the church forward. If you pay attention to your gut instincts and lead, it will become a defining moment that galvanizes your community. If you miss the moment, you will find that negative repercussions often follow.

Last week I evacuated my mother-in-law from Houston to Austin, only to watch some of the houses of my close friends flood 2 feet deep in the wake of Hurricane Harvey. Houston is a mess! My mother-in-law’s house got water to the front door, but was spared. Austin is fine. We could easily move on. But I woke up Saturday morning, saw this picture from a friend (I often visited this house growing up), and I had a Holy Spirit prompting that this was one of those critical moments—it felt like a warning and a choice. The people of Houston are my neighbors; some are pastor friends and some are people with one or two degrees of separation from many in our Austin church. We need to act with generosity and compassion. But on Saturday morning we had little planned.

As I prayed that morning about what God wanted us to do, and how he wanted me to lead, I had several past critical moments come to mind. I’ll never forget as people huddled around the TV at our church office while the horrific sights and sounds of the Twin Towers collapse crowded the screen. At first, I was shocked and didn’t know what to make of it. Then I received that gut nudge from God “This is a critical moment for you to lead.” I shudder to think what the fallout would have been had I not called an audible to scrap all we had planned, totally rewrite the message (twice), to lead through that moment. People came to faith that weekend because of it and others said they would have walked away from church forever had we missed the moment. As we held a special service later that week to mourn and pray and fast for our country, God did something in our community I could have never predicted. We emerged stronger together.

As I prayed Saturday morning, I remembered Hurricane Katrina – the devastation in our neighboring state, and remembering how most of us Austin Pastors were initially caught off guard. Then evacuees started over-running our city, and I had (and about 8-10 other Austin pastors also had) that nudge—lead the church to be my arm of compassion. We came together as pastors, coordinated how our churches could serve Katrina evacuees together, and the Austin Disaster Relief Network (which the city appointed to coordinate Harvey relief) was formed out of those meetings, as well as our ongoing Christ Together initiative now involving 300-400 churches yearly. Seeing all the needs, I remember feeling prompted to convince our board of directors to generously give $40,000 to Katrina relief, but we couldn’t afford that as a church, and I wasn’t confident people would respond. Again the nudge—lead forward in this critical moment. We gave it anyway. I was amazed at the response—how that decision prompted the generosity of our church in an ongoing way because they saw how God’s Kingdom responds and decided to join in.

I’m in the middle of the nuances of leading in a crisis moment again. I contacted a pastor I know in the heart of Houston, where not only is the flooding the greatest but is also a very impoverished area. We are mobilizing to help for the long haul because people will quickly go back to “my normal life” if they’re not led.

I bring this up because those moments will come to you as a leader. It may not be a devastating storm or earthquake or natural disaster, but it may be a tragedy at the local high school, or it may be a moral failure of one of your public leaders. Moments of critical leadership may come in a local crisis, or when fear is running rampant due to some sudden economic collapse. When those moments come, listen to your gut—God’s Spirit will be speaking deep within you—moving you with compassion or justice or righteousness to lead your church through this situation. Listen to Him and lead courageously, and you will find God will receive great glory as His church responds with His compassion.