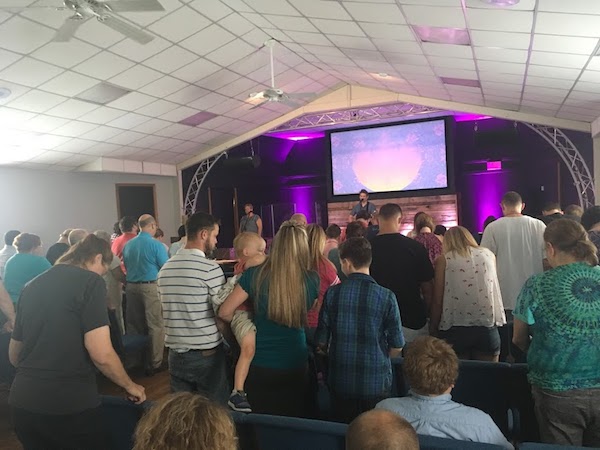 The story of NW Independence and Van Horn is a comeback story like no other. In 2008 Van Horn, along with four other schools were annexed into the Independence school district from KC. Van Horn, at the time was one of the worst-performing schools in all of the metro. Independence has been known as the “meth” capital and a place too far gone to save until about 2008. The school sparked enough good in the neighborhood to get things rolling. Several other organizations came into the city about the same time to help this revitalization effort.

In 2013, I got the “bug” to pursue church planting. I was living in Wichita Kansas, working as a youth pastor at a large church and living in a neighborhood that many had moved out and away from because of crime concerns. My wife Krystin was working in the medical field and we had a 2-year-old daughter, Nora.  We were learning a lot to prepare us for what God had next. I was learning a lot of healthy church structures from my role in youth ministry and learning how to create community and relationships on my block at the same time. I prayed for God to combine these lessons into one mission. I had been watching a church plant in KC from a distance, a friend of mine moved there about five years before to plant a unique church that partnered with the city and served the needs of the neighborhood. So, we took a big jump, sold our house, raised money, signed up with a church planting organization and moved to KC to do a residency with a 5-year-old church plant.

Once we moved, we found ourselves in a strange land and season in life. Everything was new, loose and we felt like a drop in a bucket of effecting change. My role was to meet some ministerial needs at the church I served but mainly to drive around the city, network, pray and eventually figure out where we would land and plant this church. We quickly ran into the story of Van Horn High School in Independence Missouri, an urban-type suburb (I know that’s unique) right outside of KC. The coolest things happened, I ended up in the principal’s office (this time for good) at Van Horn pitching this idea of planting a church in the school. What I learned later was this principal and his wife had been praying for a ministry to come to the school/neighborhood.  This same couple are leaders in our church to this day. Here’s a lesson, God assembles His team to accomplish His plan.

In 2014, the plan to Revive the city was underway, we became the church “spoke” on the hub of betterment for the city.  We named our church Revive because it fit the movement of the neighborhood. Our tagline is Bringing New Life to The Neighborhood. Which comes from John 11, where Jesus brings Lazarus back to life, we can easily see Jesus brings the new life and we participate. We met at Van Horn for 2.5 years then moved right across the street into a building of our own. We are great friends and advocates for the school district, the city and the close by neighborhoods we serve. God has been faithful to keep us focused on the mission. He put in our heart’s years back. Since launch, we have baptized 47 people in the name and power of Jesus, started several community efforts and seen families change from the inside out as they find this “new life” we often speak of.

What impact have you seen in your city/community?

When you partner well and advocate for those you serve, the wins are vast and celebrated by many outside of just the church. We have seen the negative reputation of our city change, and new families move in, churches partner well for the betterment efforts and the enemy lose more and more ground.

What are you trusting God for in the future?

We have a passion and plan to plant another church in the city directly south of us with a similar story over the next 2-3 years. We are convinced that what God is doing in us at Revive could be done again and again; it’s reproducible!